…open up that folded brochure at your peril! 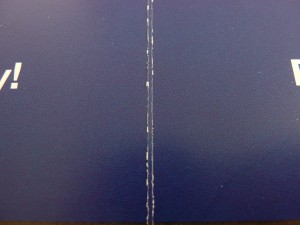 Do the insides of some of your jobs look like this?

It’s a vicious cycle that often repeats. No sooner have creasing machine manufacturers developed their latest super solution to solve a production headache before the rules change yet again. By the end of the 1990’s printing companies could either outsource their creasing work to be ran through a platen cylinder or they could buy in their own, either way the process was slow and required a specialist operator with a skill set that was dying fast.

By the beginning of the millennium those methods of creasing, all be it repackaged, swiftly became accessible to those who invested in digital presses. Morgana led the evolution, transforming an antiquated method of creasing into a simple-to-use solution that solved toner cracking, and that didn’t need some old school guy to run it – other manufacturers jumped on the bandwagon and followed suit. Platen production began to decrease because someone had the inspiration and foresight to move the goal posts and become the catalysts for change.

In the offset market a rotary method of creasing emerged as the solution to solve cracking problems at much higher speeds, Tech-ni-Fold’s Tri-Creaser attached to folding machines to offer an interesting alternative to blade and matrix technology. By 2011 Tech-ni-Fold’s evolution was gathering momentum as their CreaseStream machines, utilising their patented rubber creasing formula, hit the digital arena, bringing speed and multiple applications to the fore.

Quite literally, right now the folded sheet can easily hide a new surprise for those that pay for perfect creasing results

And then all of a sudden there arose another problem that many creasing specialists pretended hadn’t occurred! This problem crept up with no warning and it came about because of the influx of recycled and poorly manufactured stocks. The issue, compounded by toner or UV coatings,  was and still is the visible sight of “flaking” that appears along the crease on the inside of the fold. In other words cracking on the outside of the fold used to be the only problem, but all of a sudden it was the other side of the sheet that posed threats. Quite literally, right now the folded sheet can easily hide a new surprise for those that pay for perfect creasing results. Indeed the paying customer who identifies such flaking defects may have to understand that it isn’t the fault of the creasing manufacturer, the buck surely stops with the guys who made the paper doesn’t it?

Who cares anyway, don’t we just have to accept that flaking happens?

With all that said, who cares enough to at least try and reduce the break out of flaked particles along the bead of the inside crease, despite having a great excuse not to bother? Who would dare to continue the vicious cycle of evolution when some other factors are causing such issues.

Well, check out the “Double score attachment” that pushes two scores back to the inside of the crease to iron out those fibres. In tests this clever modification to the Tri-Creaser has reduced and even eliminated the flaking problem. A crease and two scores are applied in one area to greatly enhance the definition of the crease itself, on both sides of the sheet, and help eradicate a new threat in the precious field of digital finishing. We are not claiming to have fully resolved the flaking issue, yet, but are excited to announce that we are making great strides in the right direction! 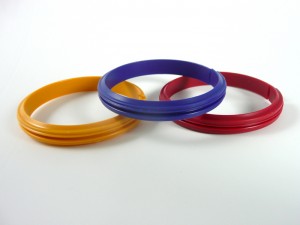 These simple plastic rings reduce and can even solve flaking issues